Reviews  (or things people have said) 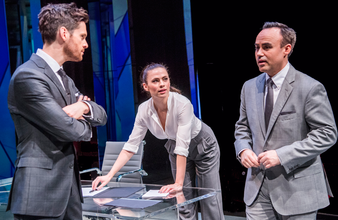 The Times  * * * *
"Anna Ledwich directs with the pace of stiletto heels walking into a boardroom, tap-tap-tap...Slick, staccato and of-the-moment, this was a guilty pleasure." Ann Treneman

The Daily Telegraph
"Anna Ledwich’s slick production, in which characters enter through a back wall of revolving mirrors to the strains of a harpsichord, as though they are players in a courtly dance, nods to Restoration comedy." Claire Allfree 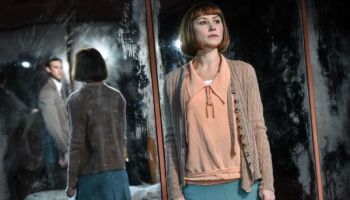 The Guardian
"Anna Ledwich’s tender production brings out the comedy and the pathos. The initial, entirely silent setup scene, is a little miracle of revelations."
Lyn Gardner

Time Out  * * * *
"This is a well-crafted chamber piece given a straightforward yet tender staging by Anna Ledwich." Theo Bosanquet 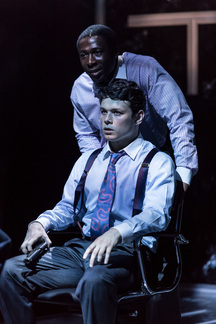 The Times  * * * *
"There’s a great vroom vroom to this play, an energy that lifts it out of the ordinary. The director Anna Ledwich keeps mixing things up... Jagged music discombobulates, people appear out of nowhere, some scenes are paranoiac, others full of fire-in-the-blood swagger." Ann Treneman

The Telegraph  * * * *
"Richly researched, it’s insistently useful and almost indecently entertaining. Anna Ledwich moves everything along at the pace of the Nasdaq data-feed" Dominic Cavendish

Daily Mail  * * * *
"Anna Ledwich’s production enters fully into the carnival spirit... It also sets up a story which is in thrall to these glamorous lowlifes... a great night out." Patrick Marmion 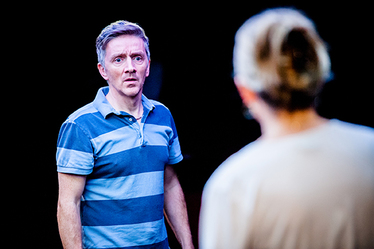 The Times  * * * * *
CRITIC'S CHOICE, Top 10 plays of 2015
"A thoroughly modern morality tale that also turns into a psychological thriller... Anna Ledwich has paced it perfectly, the acting is faultless. It’s the story that matters here and it is riveting." Ann Treneman

The Sunday Times  * * * *
CRITIC'S CHOICE
"Turns on a drip-drip-drip of unease about the digital age...ferociously funny."

The Guardian * * * *
​"Often shockingly funny and full of little ambiguities...This is a punchy, thoughtful evening that gets an intense, claustrophobic production from Anna Ledwich and boasts a quartet of fine performances." Lyn Gardner

​Evening Standard  * * * *
"A well-merited transfer... Anna Ledwich's pared-back production provides the perfect complement to the tightly coiled script. There’s no fussing with props or scene changes, the better to allow us to focus on the mounting impact of the words." Fiona Mountford

The Guardian  * * * *
"Anna Ledwich’s production piles on atmosphere, and the mingling of performance with technology is brilliantly unobtrusive and effective." Lyn Gardner

Bristol 24/7
"With the aid of magical technology and a stunning level of inventiveness, designer Conor Murphy and director Anna Ledwich have created a dreamscape made real, a complete world which wraps itself around the audience as they move from one space to another...The Stick House needs to be added to the roster of this year’s ‘must see’ events. It is theatre like you’ve never experienced before." Toby O'Connor Morse 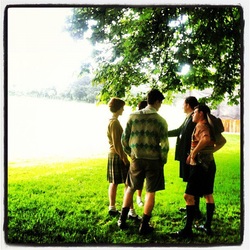 Daily Telegraph  * * * *
"Anna Ledwich's production achieves an ideal fusion if design, direction and performance... The cast is uniformly excellent...The door framed vista of the park lends a particular enchantment to this magical production and Ledwich uses the space with dazzling ingenuity."  Jane Shilling

The Observer
"Anna Ledwich's stage direction troubles the boundaries between fiction and reality by exploiting the possibilities offered by the temporary wooden theatre designed to commemorate the 50th anniversary of Chichester's Festival theatre. From a dirt-strewn stage rises a glade of blue scaffolding "trees"; lightbulbs dangle between the "branches".  Beyond these, in the place where the back wall would normally stand, a gaping space gives the audience a clear view over the green field of Oaklands Park. The action flows between these two spaces as precisely playful performances devastatingly convey a tragic tale of childhood innocence lost... As this lucid production demonstrates, we see in disconcerting simultaneous vision, not just the adults these children will become but also the grown-ups who have deformed their childhood. As embodied by this excellent ensemble, it is profoundly unsettling."  Clare Brennan 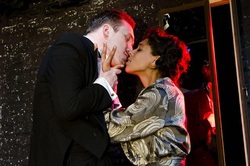 The Times  * * * *
"Impressively dramatised by Anna Ledwich...Ledwich powerfully recreates Schnitzler's tale of passion and healing wisdom...Her astonishing achievement is to create disconcerting episodes with a cast of only four actors."  Jeremy Kingston
​
The Guardian  * * * *
"Anna Ledwich's new production shows that, when sex,   dreams and shame are invoked, plenty can still be revealed about the human animal. Ledwich has turned the novella into a cool but nightmarish four-hander, which draws us into its antihero's sexual imagination with miasmic effectiveness...Under her precise direction his panic is keenly felt. In Ledwich's potent production the cast are uniformly strong...Helen Goddard's claustrophobic set and Adrienne Quartly's disorientating soundscape heighten the sickliness as fears and desires swarm into life."  Brian Logan 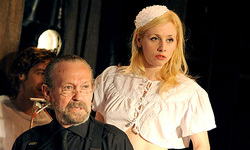 The Guardian  * * * *
“Ledwich’s production is compelling, even if it makes for an uncomfortable evening of comi-tragedy that casts the audience as voyeurs in a spiralling masturbatory nightmare...there is a great deal to admire, not least in Helen Goddard’s design, which conjures the peep show and perhaps the abattoir, too, as befits the play’s shocking ending...in Sinead Matthew’s performance this Lulu is a wonder: so greedy for life, trailing such throaty laughter that she dazzles like a mirage. Ledwich's production is compelling…[Lulu] is brought into sharper focus than usual in this intelligent, compressed version of Wedekind's original two plays.” Lyn Gardner


The Times  * * * *
"Anna Ledwich [steers] a fine cast through her almost fiendishly, incisive script with a gratifyingly sure hand...
Sinead Matthews is…sensationally apt casting...Lulu is such a multifaceted character that the clarity they bring to her story can be thrilling, especially in the confines of a venue the size of a shoebox...Credit can be shared with the designer Helen Goddard, whose set of rough wood, curtains and stretched canvas is peeled back in layers as the play progresses. The atmosphere of squalid intimacy this production conjures is just right.”  Donald Hutera

The Sunday Times  * * * *
CRITIC'S CHOICE
“Wedekind’s famous play, so scandalous in its time, gets a powerful adaptation and shocking and moving production from Anna Ledwich. Sinead Matthews plays Lulu like an angel from hell. Do not miss...Lulu (Sinead Matthews) is her own prisoner, a predator and a victim, innocent and cunning, on heat but cold inside...This is more than an adaptation...it’s a reimagination. Ledwich directs with an impeccable sense of darkness [and] Matthews gives a brilliant performance, thrilling, shocking and moving.”  John Peter

The Independent on Sunday
“Flickering between callous materialism, panic and seemingly genuine love, this Lulu is made to seem mercurially complex...Sinead Matthews’s pint-size Lulu is interesting casting, disturbingly like a little girl imitating MTV tarts, or Marilyn Monroe...Helen Goddard’s makeshift set – all rough planks, scaffolding and plastic sheeting – is oddly beautiful, softly side-lit by Emma Chapman...Anna Ledwich is one to watch.”  Kate Bassett 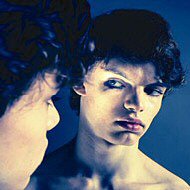 The Daily Telegraph  * * * *
"Lovely & Misfit turns out to be an unexpected pleasure and a genuinely enlightening glimpse into Tennessee Williams's art and heart...fascinating and touching...All credit to the excellent director Anna Ledwich for giving these short, unexpectedly resonant plays such a welcome outing." Charles Spencer
The Sunday Times  * * * *
CRITIC'S CHOICE
"These three one-acters by Tennessee Williams, recently discovered, are like unexpected gifts bequeathed by a long departed friend...the acting is excellent: precise, deeply felt and entirely unsentimental. " John Peter